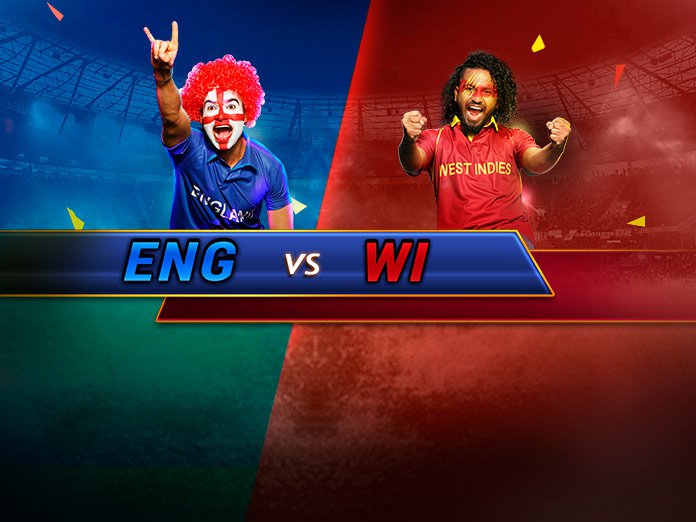 Not long ago did England register their maiden whitewash in Asia. At the receiving end was Sri Lanka with a variety of spinners in their ranks and the scoreline read 0-3.

West Indies, meanwhile, were playing against Bangladesh at their home and, unlike England, they were on the wrong side of the result.

It is a battle between numbers 3 and 8 in ICC Test Rankings.

Stuart Broad took a hat-trick in England’s first tour match. Although Broad coming back to form is good news for England, it also gives them selection headache at the same time. Broad’s competition for the same spot is the ever-improving Sam Curran, who may not be as effective as Broad with the ball, but his batting performances have been better than some of the top-order batters.

Another conundrum is the selection of Moeen Ali, Adil Rashid, and Jack Leach in the playing XI. Rashid’s leg-spin and his ability to bat well against spin give him edge over the other two finger-spinners, but it all depends on what combination England are comfortable with.

We have prepared the fantasy team on the basis of recent performances and selection troubles.

We will have two batters from the Windies side and three – including a wicketkeeper in Bairstow – from England.

Bairstow scored a swaggering 98 against West Indies President’s XI in the practice match last week, including as many as 10 fours and 2 sixes. At No. 3, his role becomes even more imperative.

Following him will be the captain Root, who is at No. 5 in ICC Test Rankings for batters. His only trouble of late has been his inability to convert good starts into big innings. Come to think of it, Jennings is much like his leader, throwing away his wicket as soon as he finds his feet. He has got all the talents of a class-apart batter. All he needs to display is consistency.

Talking of talent and making full use of the opportunity, there haven’t been many batters as brilliant as Shai Hope. He scored two unbeaten hundreds against Bangladesh in ODIs when his team was at sea. The skill to rise to the occasion is what West Indies need at the moment.

Our fifth batter will be the emerging Hetmyer. On his day, he can grind the best of bowling attacks to dust. And on other days, he can play a shot worse than what we witness from the tail-enders.

Ben Stokes is a man with a golden arm. We saw that in the series against India, that he dismissed a set Virat Kohli and changed the course of the match. With the bat, we can do both block and hit. He has 6 hundreds and 16 fifties, with a highest score of 258 in South Africa.

We can go with Ali and Curran, but their place in the playing XI is uncertain. Hence, it’s better we play safe and pick Chase and Holder.

Had Holder not sustained injuries, he might as well have become the highest wicket-taker in 2018. In 6 Tests, he took 33 wickets at 12.3, including 4 five-wicket hauls. To make his case stronger, he has a hundred at the very venue – an innings that helped West Indies salvage a draw against England in 2015-16.

We will go for the highest wicket-takers for West Indies and England in 2018: Gabriel and Anderson. The curators have said that the pitch will get better for the pacers as the match progresses.

We have gone for a spinner in Chase already. Let’s add Rashid, the wrist-spinner, to the mix. His knack of scoring crucial runs down the order will help us fetch more points.

Here are the probable XIs for both teams in case you want to explore other options.