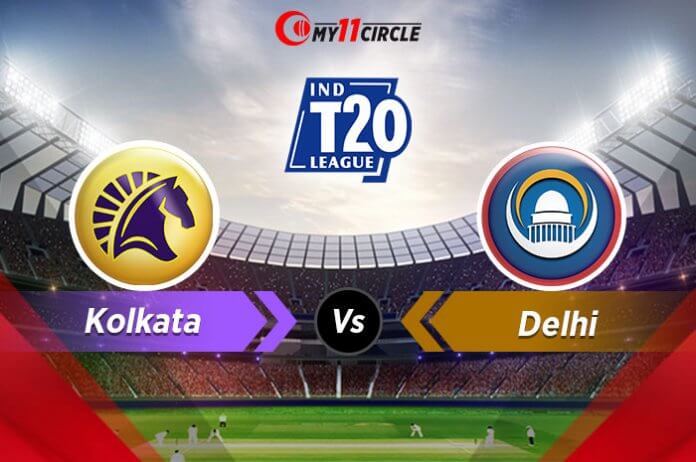 The thin layer of grass on the wicket has been making batsmen’s life difficult. The last two scores in the first innings read 84 for 8 and 125 for 5.

Two weeks ago, Shikhar Dhawan was not in the list of top 10 run-scorers of the season. Now, with scores of 69*, 57, 101*, and 106* in his last four innings, he has jumped to the second spot. In the process, he became the first player in Indian T20 League to score consecutive hundreds. At Abu Dhabi, he has scored 103 runs in two innings.

Shubman Gill has only two scores in single digits, while his lowest double-digit score reads 11 in 10 innings. The onus of providing a solid foundation and holding the innings together are on him – the very reason we see him putting a price on his wicket. With 312 runs, he is the highest run-scorer for Kolkata.

Kagiso Rabada has not gone wicketless in 23 matches of the Indian T20 League. Having sniped up 21 wickets, he is the highest wicket-taker of the season. He has been the safest option for captaincy in fantasy sports.

Shreyas Iyer likes playing on hard wickets and the one at Abu Dhabi provides just that. The Delhi captain has been in an ominous touch this season, having amassed 335 runs at a strike rate of 131. To make matters more interesting, his highest score (88*) came against Kolkata earlier this month.

Eoin Morgan scored three consecutive scores in excess of 30 – all at the very venue. However, the early fall of wickets has restrained him from playing his natural game. He, nonetheless, has been at least fetching runs consistently for his team.

Lockie Ferguson’s addition has bolstered Kolkata’s pace attack. He followed his match-winning figures of 3 for 15 with 1 for 17. His ability to deceive the batsmen with raw pace and disguised off-cutters is a perfect recipe in the shortest format of the game.

The last time Prithvi Shaw scored a fifty was against Kolkata. Ever since he has been going downhill with scores of 42, 19, 0, 0, and 7. With a player of Ajinkya Rahane’s class warming the benches, the pressure of performing will be mounting on Shaw.

The main reason the fantasy players have been selecting Pat Cummins is that he bats at No. 7. He may not have taken more than one wicket in an innings, but he has a fifty to his name. He’d become an ideal pick once he started performing with the ball.

Go through the Player Points and Selection Percentage before finalising your fantasy teams. For example, if a cricketer’s selection percentage is above 90%, you may have to think twice before leaving him out. Also, the top fantasy tip to further narrow down your choices is to check the captain and vice-captain selection percentage.