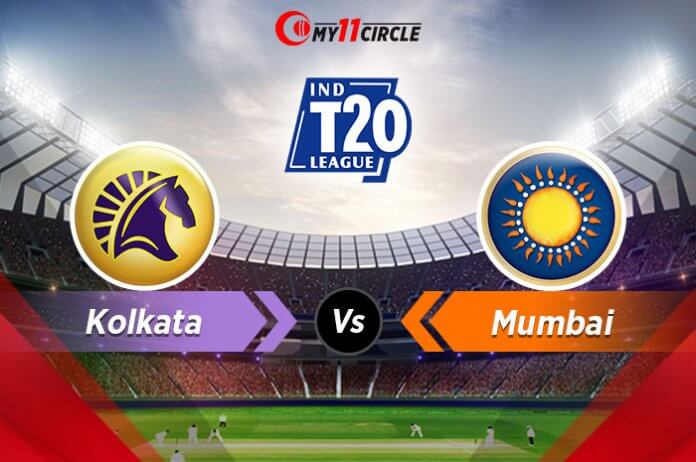 We will be back at the venue where this season of the Indian T20 League flagged off. The pitch was, as MS Dhoni called it, tacky – and it indeed was. Of the 14 wickets that fell, 9 belonged to the pacers. There wasn’t any threatening turn for the spinners, but the uneven bounce made batsmen’s life difficult.

Quinton de Kock timed everything to perfection, despite the sticky nature of the pitch. He tried consciously to play everything on the front foot, indicating that he is in a positive frame of mind. Not to forget that he was the highest run-scorer for Mumbai last season.

With 510 runs at a horrific strike rate of 204 and 11 wickets, Andre Russell was the Player of the Series in the previous season. Although the stadium is big, it isn’t massive enough to test Russell’s muscles.

Rohit Sharma’s only century of the league came against Kolkata in 2012. He won’t be batting at Eden Gardens, but such are his skills that he can make any pitch look like a batsman’s paradise.

If there’s one bowler Mumbai will be plotting against, it is Sunil Narine. Mumbai have played on this track and they know it will be an uphill task to counterattack Narine, the only bowler to bowl a maiden in a Super Over. To make things more gripping, he will open the innings and do what he does best – hit everything that comes his way.

Kolkata have confirmed that Shubman Gill will partner up with Narine at the top. Better late than never. Despite batting lower down the order, he smashed 296 runs last season. There’s nothing he cannot achieve.

Saurabh Tiwary may have attracted everyone’s attention with the extra weight he has put on, but his batting skills quashed all those talks when he started collecting runs. He was the top scorer in a star-studded Mumbai line-up in their opening game.

Eoin Morgan has been in an ominous touch of late. He will be only asked to smash. Nothing more, nothing less. Fire on all cylinders.

Pat Cummins will lead the pace attack for Kolkata. Dinesh Karthik will use him as a strike bowler, utilising him in powerplay, middle-overs, and death-overs. Such bowlers are handy in a fantasy cricket game. In 82 T20s, he has sniped up 97 wickets.

Trent Boult was the pick of the bowlers for Mumbai, trapping the dangerous Shane Watson in front with a sharp in-swinger in the very first over. He could not take another wicket, but he at least managed to keep a lid on the runs.