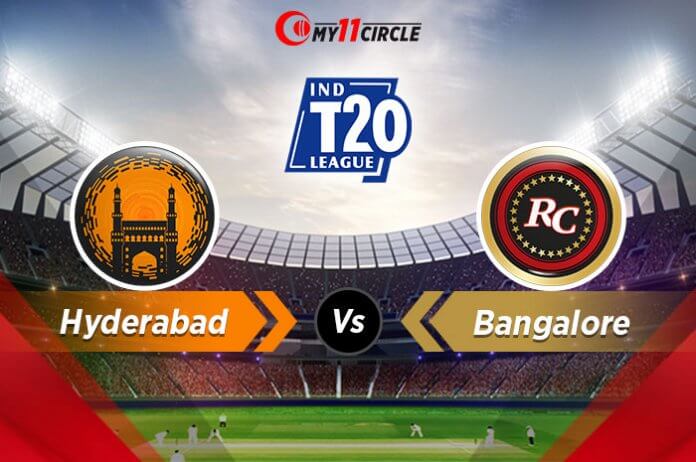 Dew has been making bowlers’ life difficult in the second innings, so much so that the chasing team has won five matches on the trot at Abu Dhabi. The highest score is also the highest chased: 196 for 2 by Rajasthan.

Being the highest run-scorer in a team that boasts of Virat Kohli and AB de Villiers is no easy feat and especially if it is your maiden season of the Indian T20 League. Devdutt Padikkal has been, for the lack of a better word, outstanding. He has smashed 472 runs at a strike rate of 126.5, including 5 half-centuries.

David Warner, in the literal sense of the idiom, led from the front in the must-win match against Mumbai, registering his highest score (85* off 58) of the season. With 529 runs in 14 matches, he is the second-highest run-scorer of the season. That being said, he has not had a good time against Bangalore, scoring 6 and 8 this season.

The same is the case with Virat Kohli, the highest run-scorer for Bangalore. He has managed scores of 14 and 7 against Hyderabad. Will the captains provide impetus in the Eliminator? It’s a question only time can tell. After all, both thrive under pressure.

Yuzvendra Chahal’s best figures (3 for 18) of the season came against Hyderabad. Overall, he has taken 20 wickets at an impressive strike rate of 15.9.

For Hyderabad, Rashid Khan has taken the bulk of the wickets. He has taken 19 wickets, maintaining an economy of 5.28 RPO. More importantly, he has gone wicketless only twice in the last 10 innings.

Wriddhiman Saha’s inclusion at the top has changed the dynamics for Hyderabad. His last three scores read 87, 39, and 58*. To put things into perspective, Hyderabad have won all three games.

AB de Villiers has not been in great form, but he is getting the job just enough. As always is the case, his strike rate has been stunning: he has hit his 398 runs at 163.7.

Having a player who bowls in the powerplay as well as death is crucial and Chris Morris does just that – not to overlook his batting skills. If anything, he is the best all-rounder in this contest. He has taken 11 wickets in 9 games and has the highest score of 25* off 8.

Performance: There are times fantasy players overlook form over popularity. In one of the T20Is between England and Australia, only 39% picked Adil Rashid in their teams. He went on to take 3 wickets. His form before that match was incredible and many dropped him over players such as Jofra Archer and Mitchell Starc. Always keep an eye on players’ forms! For that, we provide current as well as overall stats of the cricketers, so you have all the information you need to win exciting rewards.

Toss: When India bat first, Rohit Sharma often outperforms Virat Kohli. And when India chase, Kohli is the king. Make sure you pick your team – most importantly your captain and vice-captain – based on the toss.

Keep your bias aside: The best fantasy tip, however, is to remain unbiased. Do not make MS Dhoni your captain if he’s your favourite player. Just like the man himself, keep your emotions aside and analyse the match. If you think Shane and Rashid Khan are better candidates for captaincy based on their form, go ahead. Fantasy cricket isn’t about you wanting your favourite players to score. It is a game of skill. Pick only those who you think are capable of giving you points.