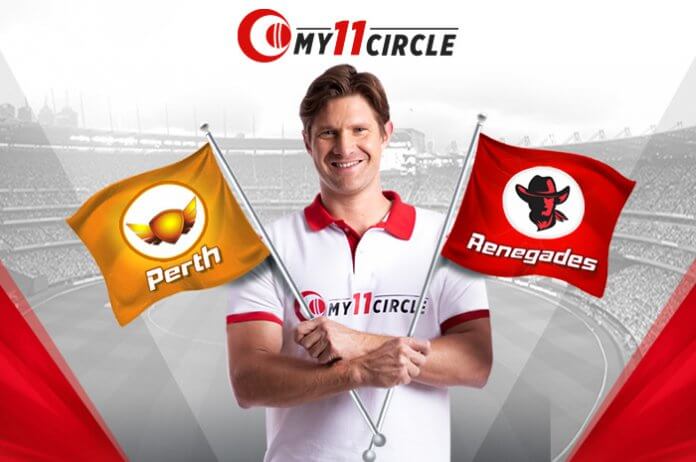 The Perth wicket has a reputation of providing extra pace and bounce. However, both teams boast of power-hitters, and we might as well witness a humdinger of a match. Power up your fantasy teams with batting all-rounders.

Both Scorchers and Renegades lost their opening matches of the season, courtesy an ordinary bowling. To make matters worse for the Renegades, they fumbled in the field at crucial junctures.

On paper, the defending champions Renegades are a far better team than the Scorchers. They have talismanic all-rounders at their disposal, while the Scorcher are a little thin on batting.

Cameron Green top-scored for the Scorchers amidst the regular fall of wickets. In his 36-run knock he managed to score only 3 fours, relying mostly on running between the wickets. Before he took the crease, their captain Mitchell Marsh had tried to steady the ship with 32 off 33. In all they failed to bat as a cohesive unit. The likes on Liam Livingstone and Cameron Bancroft could not provide any impetus, but this was their first match of the season. They will get better as the tournament progresses.

In the bowling department, only Chris Jordan managed to take wickets. His figures read 3-0-13-2. Jhye Richardson, their highest wicket-taker of the previous season, failed to maintain right lines and lengths.

Aaron Finch did not have to fire on all cylinders like he usually does, as Sam Harper took the onus on himself and smashed 39 off 14. Finch then tried to continue the counterattack, but the slowness of the pitch restricted him from cutting lose.

Shaun Marsh‘s return to the Australian T20 League was spectacular. It was his 42-run knock that propelled the Renegades to a competitive total.

Daniel Christian had a forgettable outing. He could never get going with the bat and was smashed for 31 runs in 2 overs. The veteran won’t take much time to make amends.

Harry Gurney was the pick of the bowlers, taking 2 for 26. He relied heavily on his off-cutters, eventually frustrating the batsmen.

Kane Richardson has been the unluckiest of all. He consistently beat the outside edge in the powerplay, and was unfortunate to have one of the catches dropped at the death. His figures read 4-0-18-0. Not to forget that he was the highest run-scorer in the previous season.