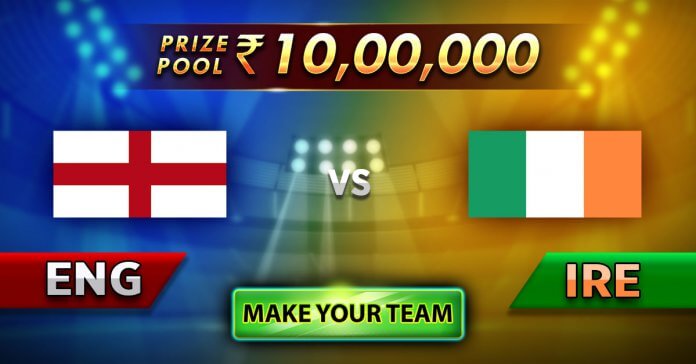 The last international encounter at Lord’s was the best game in the history of the game. The match ended in a tie, progressing to a super over. The super over ended in a tie, and England were announced the winners of the 2019 World Cup on the boundary count rule.

They will be back at the home of cricket to lock horns with Ireland in whites. The curators got 10 days to prepare a new track, which will spit venom for the batsmen until the green grass fades out.

The weather will be cloudy throughout the Test, but the rain is forecasted to play spoilsport on Day 3. Select technically solid batsmen and swing bowlers in your fantasy team to win cash prizes.

Ireland gave England a scare the last time they squared off. Only three weeks were left for the World Cup and Ireland made everyone rethink their predictions about England being the favourites. Ireland managed only 198. England would have wrapped up the match within 30 overs, but what followed was spectacular. England were reduced to 66 for 5, and had it not been for Ben Foakes (61*) and Tom Curran (47*), they would have been at the doorstep of defeat.

8 years ago, the worst had happened. England lost to Ireland in the 2011 World Cup. Riding on Kevin O’Brien’s 113 off 63, Ireland chased down a colossal target of 328 with 5 balls remaining.

When they meet on Wednesday, the dynamics will be different – in a white clothing, with a red ball, at Lord’s, under a cloudy weather, in front of spectators who love the longest format. Ireland have played only two Tests, but England cannot let them off the hook.

The biggest threat for Ireland will be the pace trio of James Anderson, Stuart Broad, and Chris Woakes. Anderson’s 103 wickets are the most at Lord’s and Broad’s 83 are the second-most, while Woakes’ average reads 10.76.

Kevin O’Brien is the only centurion for Ireland, and he already has an experience of scoring in three figures against England.

England have finally done what they should have done a year ago. Jason Roy will make his Test debut, and if he bats like he does in shorter formats, England will become a force to reckon with.

Tim Murtagh isn’t a no. 11 batsman anymore. He has a highest score of 54* at the position. Same is the case with Stuart Thompson: he showcased his batting skills against Pakistan last year, scoring 53 off 116. Treat this duo as all-rounders.