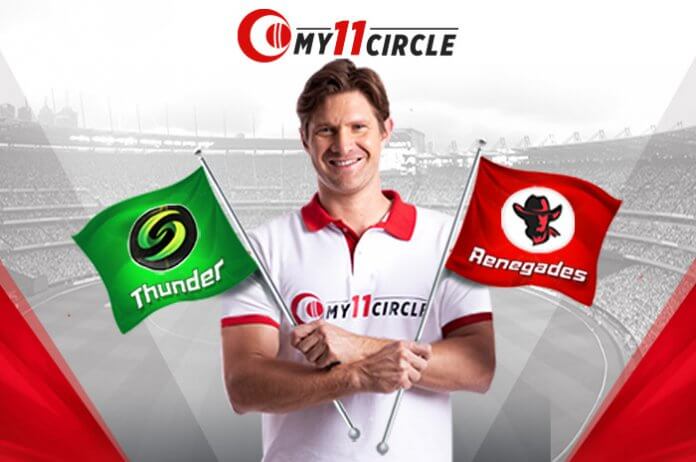 The first match of the season at Manuka Oval ended in no result due to bad quality air. Before the game was called off, the Strikers had managed 161 for 5 thanks to Jake Weatherald’s 43 and Jonathan Wells’ 55*. The pitch otherwise looked like a belter for the batsmen.

Mohammad Nabi could not change the fortune of Renegades in his first match of the season. He scored a mere 6 runs and finished with bowling figures of 1 for 33. However, Nabi is one of the best players in the world of fantasy cricket. He has a knack of picking wickets at crucial phases and adds vital runs with the bat. All-rounders, to put things into perspective, often fetch more points in fantasy games.

Daniels Sams has finished with a wicket in only 2 of 9 games. He has sniped up either three or two wickets. With 17 wickets, Sams is the highest wicket-taker of the season.

Beau Webster may not have been a favourite of the fantasy players, but he has scored only 9 runs fewer than Shaun Marsh, the Renegades’ highest run-scorer. Perhaps they ignore him because he bats in the middle-order and is overshadowed by the other stars in the team.

In the previous match between these teams, the Thunder edged past the Renegades by 6 wickets. Usman Khawaja and Alex Hales scored brisk half-centuries in a chase of 170 runs.

While Renegades are struggling at the bottom with no wins in 9 matches, the Thunder are at the seventh spot with 4 wins and as many losses. Going by the current form and team combination, the Thunder have a clear edge over the defending champions.