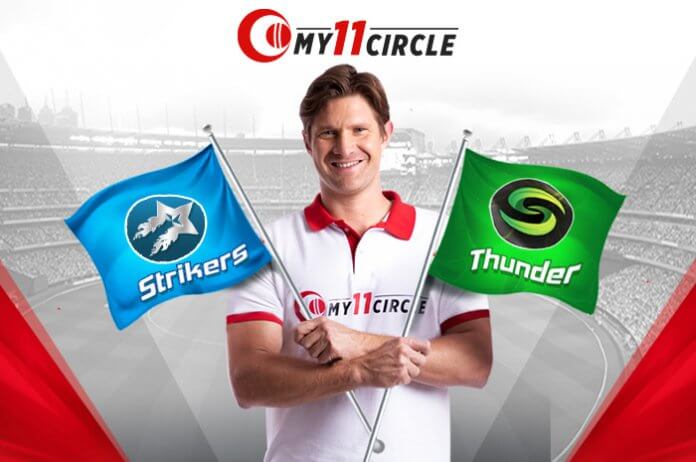 The first match of the season at the Adelaide Oval produced as many as 381 runs in 36 overs. However, Rashid Khan proved that if you annoy the batsmen with tight lines and lengths, wickets are easy to come by. Expect an event contest.

The previous match between the Strikers and Thunder at Canberra was abandoned due to bad air. The smog quality was six times worse than the usual limit. The game halted when the Thunder were 40 for 1 in 4.2 overs in the pursuit of Strikers’ 162-run target.

The Strikers have thus far been the best team this season. With 7 points in 3 matches, they are at the top of the points table. The Thunder moved down to No. 3 after their defeat to the Sixers in the super over.

Whoever bats first will have the upper hand. Otherwise, both teams go neck and neck in terms of talent and team combination.

The top two run-scorers of the season belong to the Strikers: while Alex Carey (186 runs) has been class-apart with his stroke play, the onus of leading the resurgence has been on Jonathan Wells (161 runs). To make matters worse for the opposition, both bat in the middle-order and do not throw away their wickets easily.

Before these two take the crease, Jake Weatherald has to lay the foundation, and he has done a fine job thus far. His 152 runs have come at a strike rate of 153. To put things into perspective, this trio has been undroppable in the world of fantasy cricket.

In the bowling department, Rashid Khan and Wes Agar have taken 11 wickets between them. While Rashid has been economical, Wes has been leaking runs at 9 RPO.

With 156 runs at a strike rate of 145.7, Calum Ferguson leads from the front in the batting department as well. His both half-centuries came in a time of trouble.

Alex Hales and Usman Khawaja have been blowing hot and cold. They either went all guns blazing or threw away their wickets easily. That being said, both will remain the cynosures of the Thunder’s batting. While Hales’ highest score is 77, Khawaja’s reads 74.

Daniel Sams may have given away runs at an unreasonable rate, but he has time and again managed to snipe up wickets at crucial intervals. He bowls with the new ball as well as at the death. His 15 wickets have come at an average of 15. Meanwhile, Arjun Nair, Chris Morris, and Jonathan Cook have scalped 4 wickets each.