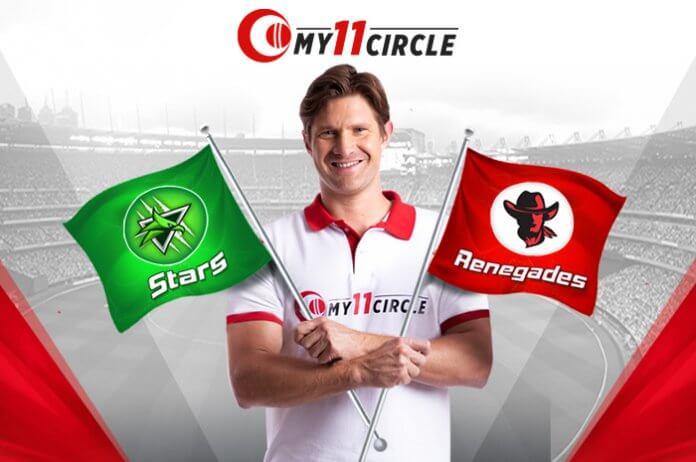 The average first innings in the previous season at the Melbourne Cricket Ground (MCG) read 156 and 125 respectively. The team batting first won 3 out of 5 matches. That being said, the pitch has been good for the wrist-spinners.

This is a contest between the finalists of the previous season. The Stars were well on course to lift the title, being in a commanding position at 93 for no loss in a chase of 146 runs. Ben Dunk and Marcus Stoinis were smashing the Renegades bowlers to pulp, but what followed will forever haunt the Stars. They slumped down dramatically to 112 for 7 and could never make amends. Come to think of it, the Stars have already made a mess of a chase twice this season.

On the other hand, the Renegades have lost all five matches. They haven’t played anything like defending champions.

With 211 runs at 53.2, Marcus Stoinis is the second-highest run-scorer of the season. He has been crucial to Stars’ success, as both his half-centuries came in a winning cause. Not only the onus of laying a strong foundation is upon him but he also has taken the responsibility of batting through to keep the innings together.

The Stars replaced Sandeep Lamichhane with Haris Rauf in their previous match, and the decision reaped rewards for them. The fiery pacer ended with the best bowling figures (2 for 24) for them. With 10 wickets in a mere 3 matches, he is at the second spot in the bowling chart.

Although Shaun Marsh‘s efforts have been in vain for his team, he has been one of the top players in fantasy cricket. His scores this season read: 42, 55, 37, 16, and 40. Aaron Finch’s case is the same: his 166 runs have come with an impressive strike rate of 140.

Beau Webster has been a surprise package this season. He has scored the third-most runs for the Renegades.

Cameron Boyce had a tough start to the season, but he seems to have found a way to provide impetus. He has taken 4 wickets for 49 runs in his last 2 matches.

Another leg-spinning option worth taking is Adam Zampa. His 7 wickets have come with a strike rate of 18.5.

Glenn Maxwell has highest scores of 83 and 43. When he failed with the bat, he made sure he makes amends with the ball. He has 4 wickets to his name including the dismissals of Usman Khawaja and Alex Hales in the powerplay.