The wicket at Colombo has been sporting, so much so that we have witnessed three totals in excess of 280 runs and 31 wickets fall in two ODIs.

Charith Asalanka has been a cynosure in the middle-order for Sri Lanka. With 149 runs at 74.5, he has scored the most runs in the series. He helped Sri Lanka reach a competitive total in the opening match and then kept them in the hunt in the second match with a score of 77 off 69.

Thanks to Janneman Malan’s hundred that South Africa managed to level the series 1-1. Against disciplined bowling, he continued building partnerships to keep the scoreboard ticking. He took 135 deliveries for his 121 runs, scoring 9 fours and a six. His opening partner Aiden Markram missed his maiden ODI hundred by a mere 4 runs in the first match; in the second, he perished for 21 off 29.

Once Avishka Fernando finds his feet, there’s no stopping him from getting a big score. It was his 118 off 115 that propelled Sri Lanka to 300 for 9.

Tabraiz Shamsi is the only bowler to have taken a five-wicket haul so far. It was his rampage in the middle-overs that pushed Sri Lanka on the back foot. His overall form has been impressive, taking 20 wickets in the last 10 competitive matches.

You can make as many teams on My11Circle, one of the best fantasy cricket apps in India and win real cash.

Rassie van de Dussen and Reeza Hendricks have scored a fifty each, while Henrich Klaasen has the highest score of 43. South Africa’s top five batters have been effective for the fantasy players.

Dasun Shanaka and Dhananjaya de Silva continue to be Sri Lanka’s mainstays in the middle-order. Both have had starts but failed to convert them into big scores. However, it is their all-round skills that make them impactful in fantasy cricket.

Wanindu Hasaranga has not been at his best. He has scored a meagre 6 runs and taken 2 wickets. However, forms and fortune won’t take time to change. He thrives under pressure, and the final on Tuesday should get the best out of him.

Chasing has been an uphill task in the series. Sri Lanka came painfully close in the first contest, but the wicket slows down towards the end of the second series.

South Africa, however, are ahead in the race. They have bowled far better than the home team, making sure they keep taking wickets at regular intervals. 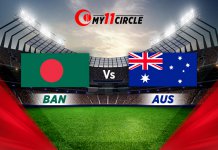