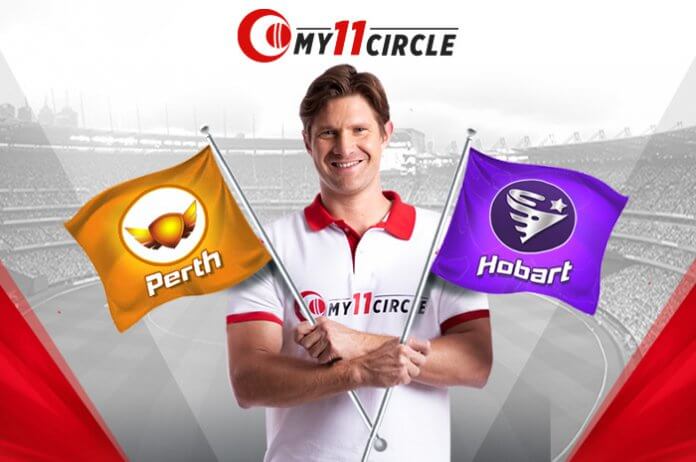 The averages first and second innings scores at the Perth Stadium read 185 and 156 respectively this season. The team batting first has won all matches. Of the 30 wickets that fell, only 6 belonged to the spinners.

Scorchers and Hurricanes have won 2 of 5 matches, stuttering at 6th and 7th positions respectively in the points table. While the Scorchers boast of a powerful batting, the Hurricanes have variety in their bowling. To put things into perspective, the Scorchers have the advantage of playing at home. They know the nook and cranny of the Perth Stadium.

There’s a reason D’Arcy Short won the Player of the Tournament award for consecutive years. He scores a lot of runs at the top and fools the batsmen with his wily wrist-spin. He did leak runs against the Heat, but he managed to take the all-important wicket of Matthew Renshaw on a wicket that had nothing for the bowlers. His 145 runs are the most for the Hurricanes this season. Don’t hesitate to make him a power player in your fantasy team.

With 9 wickets at 13.5, Riley Meredith is the third-highest wicket-taker of the season. More importantly, he has achieved all this with an economy of under 7 RPO.

Qais Ahmed has been uncharacteristic in the last two matches, bowling quicker through the air. He tossed up the ball bravely during his four-wicket haul. He is only 19, and will learn with time.

Ben McDermott has been blowing hot and cold. Not to blame him that his team has failed to bat as a cohesive unit. In 5 matches, he has scored 111 runs including a match-winning half-century.

Mitchell Marsh leads from the front in the batting department for the Scorchers. He has, in literal sense of the word, blasted 145 runs with a strike rate of 142 including 9 sixes.

Cameron Bancroft has scored 2 half-centuries in 5 matches – both while batting first. His job is to bat as long as possible to keep the innings together.

Josh Inglis and Liam Livingstone, barring the solitary fifties, haven’t provided much impetus. However, they have been among the favourites in fantasy cricket, with more than 80% players picking them in their teams.

Chris Jordan and Fawad Ahmed have picked up as many as 15 wickets between them. However, they have been giving away runs at an unreasonable rate.