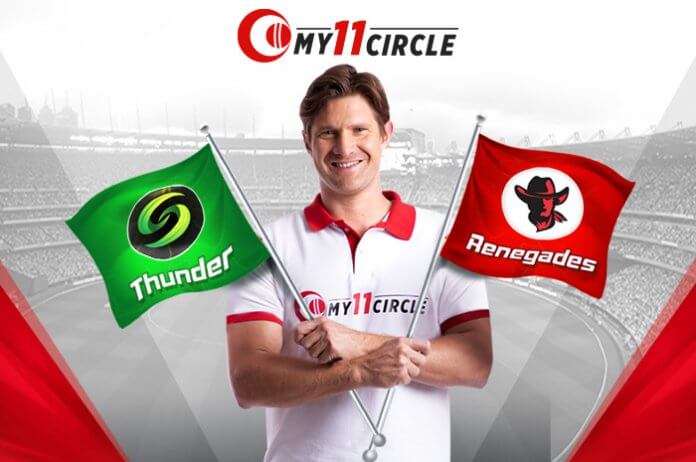 In the only T20I at the Simonds Stadium in Victoria, Sri Lanka chased down Australia’s competitive score of 174 runs. As has been the case so far in the Australian T20 League, the pitch is likely to favour the batsmen.

Aaron Finch, Australia’s limited-overs captain, led Renegades to their maiden title win in the previous season. They played aggressive brand of cricket. And that’s how Finch plays. He goes bonkers – no matter who the opposition is.

He will be up against the calm and composed Calum Ferguson. He led the Thunder remarkably well in the tournament opener, first batting through and then making sure he smothers the opposition with tight field placements.

If anything, this is a battle between fire and ice.

Although Renegades boast of a strong batting line-up, they will be mindful of Thunder’s bowling variety. It all boils down to who bowls better in crunch situations. Expect a humdinger of a game.

Had it not been for Calum Ferguson’s 73*, the Thunder would have stared down the barrel. Not only did he hold the innings together but also upped the ante in the death overs.

Chris Green was handy with both bat and ball. He blasted 25 off 17 and then took 2 wickets at crucial intervals. His fellow bowlers Daniel Sams, Jonathan Cook, and Arjun Nair also took 2 wickets each.

The Renegades have the best team on paper. Aaron Finch, Dan Christian, Mohammad Nabi, Shaun Marsh, Kane Richardson – you name them, you get them.

Dan Christian is Fantasy Players’ delight. He performed with distinction in all the departments: he smashed 254 runs, he sniped up 15 wickets, and to top it all, he grabbed as many as 15 catches. There aren’t many cricketers who will give you as many points as Christian does. He is one of the top contenders for captain.

Kane Richardson has been another outstanding performer for the Renegades, so much so that he was the highest wicket-taker of the previous season. Finch can use him in the powerplay as well as death. His most potent delivery is a well-directed yorker. Batsmen will have to watch out for their toes.

The Renegades’ batting is a blend of experience and young talent. Sam Harper, especially, was impressive. His job was to continue the onslaught the openers had started – no matter what situation the team is in.