It came as a shock when Hyderabad replaced David Warner with Kane Williamson as the captain. If anything, he has been the face of the franchise and a proven winner with both batting and captaincy. However, 5 defeats in 6 matches must have panicked the management. There might be more to it: one of it being Warner expressing his disappointment over the team composition. Whatever it may be, the onus is now on Kane Williamson to lift the team. He has done it before, though, taking Hyderabad to the final of the 2018 season.

Shivam Dube can hit massive sixes, but his ability to up the strike rate has cost the team on a few occasions now. They may promote Rahul Tewatia up the order and replace Dube with another all-rounder in Mahipal Lomror.

The management has made it clear that there will be changes in their team composition. Either Jason Holder or his namesake Roy may replace Warner who has batted at a strike rate of 110.

Rajasthan have won only one game more than Hyderabad. They have got more talents, but they somehow fail to translate the talents into performances. Their captain Sanju Samson is guilty of that too. Fortunately for the team, he has realised that he needs to bat longer and not play false strokes that he is reputed for. On the other hand, Williamson is calm and he rarely—rather never—plays uncharacteristic shots.

Both teams have a frail lower middle-order. Chris Morris has done the job once, but that was a result of ordinary bowling by Delhi. Hyderabad have Suchith and Rashid Khan who can play exciting shots, but they aren’t regular finishers.

While Rajasthan have a strike bowler in Morris, Hyderabad boast of Rashid Khan who can turn the game on its head. But that’s that. The others haven’t been able to play as a cohesive unit.

There wasn’t any dew in the second innings last night, and the way runs came in both innings, toss wouldn’t matter much. To put matters into perspective, the pitch is a paradise for the batsmen.

Rajasthan have had more close games than Hyderabad have. From Butler to Tewatia, they have game-changers in their batting armoury. On such a wicket, if they apply themselves sensibly, they can score as many runs they want. The same can’t be said for Hyderabad. They have been relying heavily on their top order. If the foundation isn’t laid, they look toothless.

No doubt that runs will come in boundaries. It all depends on how the bowlers perform, and both teams haven’t been at their best in this discipline. 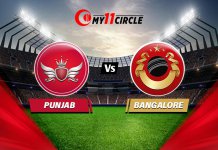