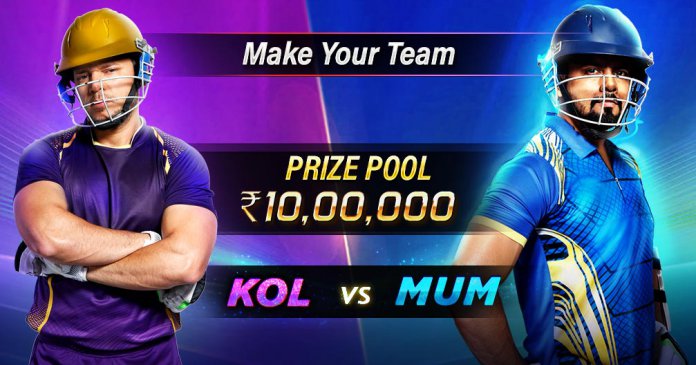 The average first and second innings scores, at Kolkata this season, read 188 and 183 respectively. The highest score registered here is 218 for 4 by Kolkata against Punjab.

As has been the trend this season, the chasing team has won four times in six games here. If anything, it is a belter of a track. Get ready for yet another run fest.

Note that you can, now, change your team after the toss. You can also check players’ performances in the last 5 matches. Tap on the players’ names to get the data while making your fantasy team. Also get to know the promotion to hit the jackpot.

Kolkata have been on a downward spiral, having lost six matches on the trot – four of which have come at home. One more loss and their dream to qualify for the playoffs will be wiped off. To make matters worse, they have lost their last eight matches against Mumbai.

Mumbai need one more win to confirm a spot in the playoffs. They are at the second position, with 7 wins from 11 matches.

Rohit Sharma’s affair with Eden Gardens is often talked about. His highest Test score, 177, came at the venue. His 264, the individual highest score in ODIs, came at the venue. To add fuel to the fire, he also has a hundred in the IPL. There is not a thing that Rohit has not achieved at the Mecca of Indian cricket. However, in this season, he has not been at his mightiest, having collected 295 runs at an average of 29.5. We might as well see the Hitman better the numbers tonight.

Russell has smashed most runs for Kolkata. In 11 games, he has collected 406 runs with a strike rate of 209.2. In the bowling department, Chawla has done bulk of the damage, having pouched 9 wickets in 11 games.

For Mumbai, de Kock has been consistently bludgeoning runs at the top. He is 7 runs shy of completing 400 runs this season. On the other hand, as always has been the case over the years, Bumrah leads the bowling chart. He has taken 13 wickets in 11 games.