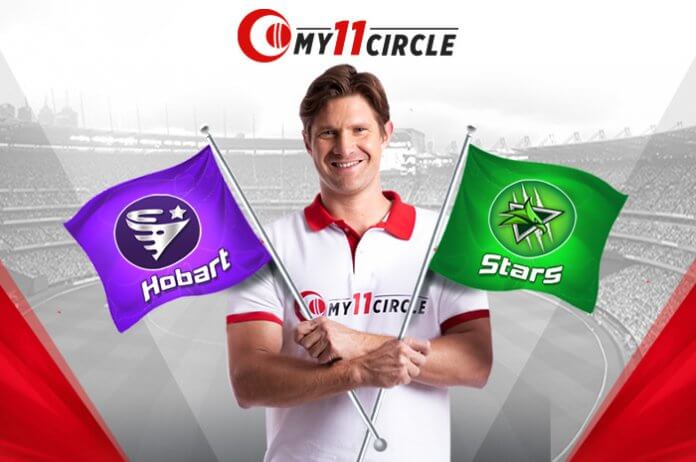 The pitch at the Aurora Stadium often produces even contest between batsmen and bowlers, and that anyway has been the case in the Australian T20 League. Make sure your fantasy team is balanced.

In the previous match between these teams, Marcus Stoinis’ 81* and Haris Rauf’s 5-wicket haul smashed the Hurricanes to pulp. The Stars won the game by 52 runs.

Both teams have won 2 in 3 games. However, the Stars have performed well in all departments, while the Hurricanes have been thin on batting. D’Arcy Short has been their lone warrior.

With 130 runs at 65, Marcus Stoinis is the highest run-scorer for the Stars. His batting at the top not only lays a foundation for the team but also keeps the opposition on its toes. When he hits the ball, it stays a hit.

Dale Steyn conceded 5 consecutive boundaries in his first over of the Australian T20 League, but ended it up with a wicket. Where there’s Steyn, there has to be drama.

Given Sandeep Lamichhane has taken a mere 3 wickets in 3 matches, Haris Rauf is likely to replace him. Despite playing a game fewer than his fellow bowlers, Rauf is still the highest wicket-taker for the Stars.

Nathan Coulter-Nile was unlucky to not get a wicket despite bowling with discipline. However, he made it up with a blistering knock of 20 off 8 for the fantasy players who picked him.

Adam Zampa has been the pick of the bowlers, accounting for 6 wickets with an economy of just over 7 RPO.

D’Arcy Short has scored 2 fifties in 3 matches, proving why has been winning the Player of the Tournament awards for the last 2 seasons. Although the strike rate of 128 seems a little low for his standards, it has been enough for his side.

Ben McDermott‘s fifty in the last game rescued the Hurricanes from a certain defeat. He did it all with a mere boundary. His running between the wickets was exceptional.

Riley Meredith has picked up the most wickets for the Hurricanes. His 7 wickets have come at an average of 9, while maintaining an economy of 5.2. Qais Ahmad is at second spot with a wicket fewer.